Your browser (Internet Explorer 8) is out of date. It has known security flaws and may not display all features of this and other websites. Learn how to update your browser

This is the original Queen Charlotte Track guided walk which completes the entire track over four days – we call it the Classic. After an exhilarating hike each day, come to rest at these iconic lodges – Furneaux Lodge, Punga Cove and Portage Hotel - each complete with a restaurant, comfortable quality ensuite accommodation and a superb waterfront setting. You will be part of a small walking group and enjoy great camaraderie, food and wine, discerning service and the knowledge of our local guides. This is walking as its most civilised with all the comforts of home!

A pre-tour briefing is held the day prior to departure. Details will be forwarded with your booking confirmation.

We collect you from your accommodation in Picton this morning, introduce you to your Wilderness Guide and then depart on the boat trip to Motuara Island for a tour en route to Ship Cove. Learn about the fascinating marine life of this area along the way and, if we are lucky, see dolphins as well! Enjoy a short walk on Motuara Island Bird Sanctuary to the lookout – this affords spectacular 360 degree views of the Marlborough Sounds – and see many of New Zealand’s endangered bird species including the South Island Saddleback (Tieke).

Arrive late morning at Ship Cove to begin the Queen Charlotte Track. This scenic and historic reserve was a favourite anchorage for Captain Cook during his explorations in the 1770s as well as being a site of significance for local Maori. Bush is mainly a mixture of stunning podocarp and beech forest with punga ferns and other New Zealand native foliage. This day is regarded as the premier section of the Queen Charlotte Track. Your walk concludes at the historic Furneaux Lodge. NB. The visit to Motuara Island is weather dependent – There is no shelter on the island (nor toilet).

Today’s mainly coastal walk takes you from Furneaux Lodge to Punga Cove through mostly regenerating native bush to the call of bellbirds, fantails and other New Zealand native birds. From Furneaux Lodge, the track continues through native bush and over a small swing bridge to the head of Endeavour Inlet. Pause there to learn more about antimony & the mining industry that thrived there in the 1880s. Follow the main track onwards and into Big Bay where pristine native beech forest awaits before working your way towards Camp Bay and, five minutes on from there, your accommodation for the evening at Punga Cove.

A challenging but rewarding day on the ridgeline between Punga Cove & Torea Saddle. Truly grand views abound round every corner – a wonderful reward indeed. Stare in awe at the sunken river valleys of the Marlborough Sounds from the iconic Eatwell’s Lookout. At different times you can see both the Queen Charlotte and Kenepuru Sounds as you walk. This is a truly spectacular section of the track. Those who feel like a day’s rest today can opt for a boat ride around the bays’ of the Queen Charlotte Sound to the Portage Hotel. NB. Optional boat trip available to Portage Hotel today for non-walkers (additional cost).

Farewell Portage Hotel and ascend to the ridgeline once again, enjoying stunning views back towards Picton as well as into the turquoise waters of the Kenepuru Sound. Open farmland and a grand native bush section to finish is a fitting finale after four days of walking. Take time for a photo stop at the picturesque Davies Bay – you won’t want the journey to end. Today you return by boat from the Anakiwa Jetty to Picton, arriving back to Wilderness Guides HQ by late afternoon. 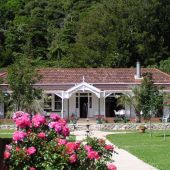 Furneaux Lodge offers a range of accommodation depending on your requirements. The waterfront suites used for our Classic guided walk are contemporary one bedroom apartments, and are absolutely private with stunning views. Our standard independent packages stay in the Tobias Junior Suites, each with own ensuite.

Set amongst stunning scenery in the magnificent waterways of New Zealand's Marlborough Sounds, Punga Cove is the perfect retreat for people wanting to relax in style. You'll be accommodated in a modern ensuite unit with stunning views of the bay. 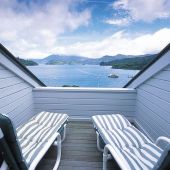 The Portage Hotel is nestled at the narrowest point between Queen Charlotte & Kenepuru Sounds with a wonderful view into Kenepuru Sound. This well-established accommodation place has a reputation for a fine restaurant and features natural timber chalets. This package includes quality accommodation in Korimako ensuite-style units,all with water views.


NB. On some of the above departures our Classic guided walk will stay at Lochmara Lodge on the third night, not the Portage Hotel. 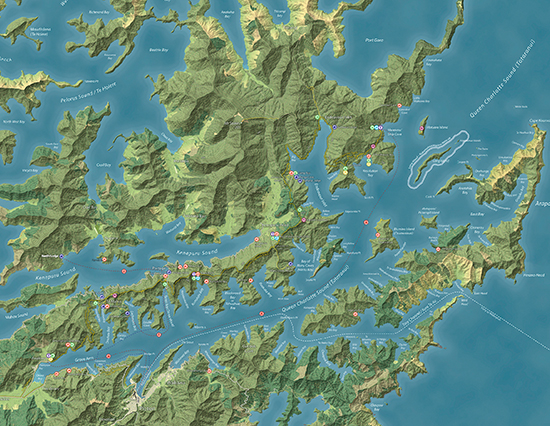 $1250NZ per child (based on sharing room with two adults)